US plane harmed by surface-to-air fire in eastern Afghanistan 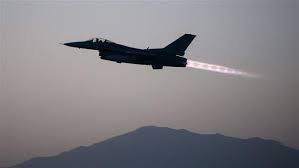 KABUL: A US fighter aircraft came under fire while flying in eastern Afghanistan a week ago, a US military authority in the capital Kabul said on Monday.

The F-16 experienced “little arms fire” in the region of Paktia on Oct. 13, which hit the aircarft’s stabilizers and harmed one of its weapons.

“The pilot casted off two fuel tanks and three weapons before securely coming back to base,” the authority said, including that the pilot was uninjured.

He declined to say at what elevation the plane had been flying or where it took off and landed.

A Taliban representative had guaranteed its warriors shot an enemy plane down in eastern Afghanistan on Oct. 13. Nato said at the time there was “no operational reporting to support those cases”.

It was the third safety incident involving coalition military aircraft in Afghanistan this month.

On October 2, a US military transport plane smashed after take-off, executing 11 faculty of Nato’s worldwide mission in Afghanistan, Resolute Support, in what authorities depicted as a mischance.

On October 11, five individuals from Resolute Support were executed and five harmed when a British military helicopter slammed in a “non-hostile” episode in the capital Kabul.