exciting story about how a brave Sikh helps his brothers. Risks his life to save his life. Jogi is an overall compelling and watchable emotional drama based on real events, overall Jogi is a gripping and sensitive drama. Ali Abbas Zafar and Sukhmani Sadana have written a very sensitive and thrilling story. Being a sensitive drama, the story grabs the attention of the audience. It is a human drama. Which the audience will like very much. Which will undoubtedly make you sad.

The film is at its best when, in 1980s India, as the religious conflict unfolds, three friends of different religions come together to launch a brave but dangerous rescue operation for their neighborhood. And they decide to risk their lives to save hundreds of others trapped in the city riots. It will be interesting to see if these guys succeed.

As you know Diljit Dosanjh is a talented singer and actor, he started his career in Hindi cinema with the debut “Udta Punjab”. It was first seen in Punjabi films. And Diljit Dosanjh starrer’s latest movie “Jogi” can now be watched on Netflix without going to theatres. When Jogi (Diljit Dosanjh) decides to save the people of his street in Trilokpuri from the fire of communal sentiments, Jogi finds himself in such a situation. Finds what he never asked for: Stumbled upon Sikh families, men, women, and children, as they flee certain death, their friends Ravinder Chautala (Zeeshan Ayyub) and Kalim Ansari (Paresh Pahuja) share that they lost their jobs and left life. Joe is the fourth friend, who is spreading hatred for Jogi after a personal loss, to end their friendship, to fulfill his agenda. Drawing from real events, it can be an interesting combination of fact and fiction. was, But the writers – Sukhmani Sadana and Zafar – fail to fill in the vacancies, and as a result, the transition strikes a wrong note. In the beginning, the performances remind us of commercial films made in the mid1980s. Sophia the robot is a social humanoid robot developed by the Hong Kong-based company Hanson Robotics. Sophia was activated on February 14, 2016, and made her first public appearance in mid-March 2016 at South by Southwest (SXSW) in Austin, Texas, United States.

Sophia the robot has been covered by media around the globe, and has participated in many high-profile interviews. In October 2017, Sophia was given Saudi Arabian citizenship, and became the first robot to receive citizenship of any country. In November 2017, Sophia was named the United Nations Development Programme’s first Innovation Champion, and is the first non-human to be given a United Nations title.

Origin of Sophia the robot Robot Sophia the robot was first activated on February 14, 2016. The robot, modeled after the ancient Egyptian Queen Nefertiti, Audrey Hepburn, and its inventor’s wife, Amanda Hanson, is known for its human-like appearance and behavior compared to previous robotic variants. As of 2018, Sophia’s architecture includes scripting software, a chat system, and OpenCog, an AI system designed for general reasoning. Sophia imitates human gestures and facial expressions and is able to answer certain questions and to make simple conversations on predefined topics (e.g. on the weather). Sophia uses speech recognition technology from Alphabet Inc. (the parent company of Google) and is “designed to get smarter over time”. Its speech synthesis ability is provided by CereProc’s text-to-speech engine, and also allows it to sing. Sophia’s intelligence software is designed by Hanson Robotics. The AI program analyses conversations and extracts data that allows it to improve responses in the future.

Hanson designed Sophia the robot to be a suitable companion for the elderly at nursing homes, or to help crowds at large events or parks. He has said that he hopes that the robot can ultimately interact with other humans sufficiently to gain social skills. Sophia is marketed as a “social robot” that can mimic social behavior and induce feelings of love in humans.

Sophia the robot has at least nine robot humanoid “siblings” who were also created by Hanson Robotics.Fellow Hanson robots are Alice, Albert Einstein Hubo, BINA48, Han, Jules, Professor Einstein, Philip K. Dick Android, Zeno, and Joey Chaos. Around 2019–20, Hanson released “Little Sophia” as a companion that could teach children how to code, including support for Python, Blockly, and Raspberry Pi. 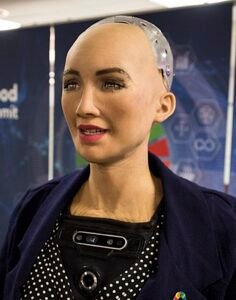 What can Sophia the robot do

A computer vision algorithm processes input from cameras within Sophia’s eyes, giving Sophia the robot visual information on its surroundings. It can follow faces, sustain eye contact, and recognize individuals. It can process speech and have conversations using a natural language subsystem Around January 2018, Sophia was upgraded with functional legs and the ability to walk. CNBC has commented on Sophia’s “lifelike” skin and its ability to emulate more than 60 facial expressions.

Sophia the robot is conceptually similar to the computer program ELIZA, which was one of the first attempts at simulating a human conversation. The software has been programmed to give pre-written responses to specific questions or phrases, like a chatbot. These responses are used to create the illusion that the robot is able to understand conversation, including stock answers to questions like “Is the door open or shut?” In 2017 Hanson Robotics announced plans to open Sophia to a cloud environment using a decentralized blockchain marketplace. 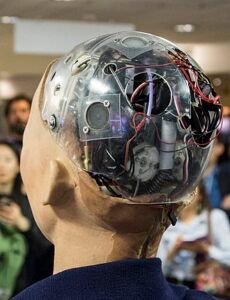 David Hanson has said that Sophia would ultimately be a good fit to serve in healthcare, customer service, therapy and education. In 2019, Sophia displayed the ability to create drawings, including portraits.

What were the Criticism that Sophia the robot has to face

According to Quartz, experts who have reviewed the robot’s open-source. code state that Sophia the robot is best categorized as a chatbot with a face. Many experts in the AI field disapprove of Sophia’s overstated presentation. Ben Goertzel, the former chief scientist for the company that made Sophia, acknowledged that it is “not ideal” that some think of Sophia as having human-equivalent intelligence, but argues Sophia’s presentation conveys something unique to audiences: “If I show them a beautiful smiling robot face, then they get the feeling that ‘AGI’ (artificial general intelligence) may indeed be nearby and viable… None of this is what I would call AGI, but nor is it simple to get working.” Goertzel added that Sophia did utilize what The Verge described as “AI methods”, including face tracking, emotion recognition, and robotic movements generated by deep neural networks\. Sophia’s dialogue is generated via a decision tree, but is integrated with these outputs uniquely. 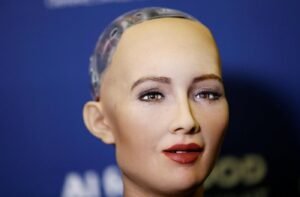 According to The Verge, Hanson often exaggerates and “grossly misleads” about Sophia’s capacity for consciousness, for example by agreeing with Jimmy Fallon in 2017 that Sophia was “basically alive”. In a piece produced by CNBC which indicates that their own interview questions for Sophia were heavily rewritten by its creators, Goertzel responds to the Hanson quote by suggesting Hanson means Sophia is “alive” in the way that, to a sculptor, a piece of sculpture becomes “alive” in the sculptor’s eyes as the work nears completion.

In January 2018, Facebook’s director of artificial intelligence, Yann LeCun, tweeted that Sophia was “complete bullshit” and slammed the media for giving coverage to “Potemkin AI”. In response, Goertzel stated he had never pretended Sophia was close to human-level intelligence.

See Also: The $93-Billion Plan to Put Astronauts Back on the Moon SpaceX’s Starship spacecraft and Super Heavy rocket (collectively referred to as Starship) represent a fully reusable transportation system designed to carry both crew and cargo to Earth orbit, the Moon, Mars and beyond. The Starship will be the world’s most powerful launch vehicle ever developed, with the ability to carry in excess of 100 metric tonnes to Earth orbit. 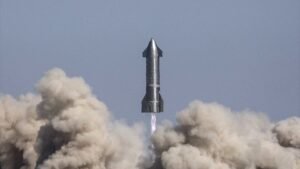 SpaceX’s Starship is the fully reusable spacecraft and second stage of the Starship system. It offers an integrated payload section and is capable of carrying passengers and cargo to Earth orbit, planetary destinations, and between destinations on Earth. The first stage, or booster, of our next-generation launch system has a gross liftoff mass of over 3 million kg and uses sub-cooled liquid methane and liquid oxygen (CH4/LOX) propellants. The booster will return to land at the launch site on its 6 legs. 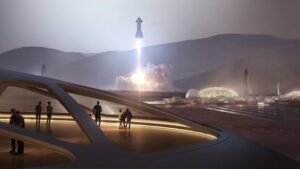 Starship is designed to deliver satellites further and at a lower marginal cost per launch than our current Falcon vehicles. With a payload compartment larger than any fairing currently in operation or development, Starship creates possibilities for new missions, including space telescopes even larger than the James Webb.

Starship can deliver both cargo and people to and from the ISS. Starship’s fairing provides significant capacity for in-space activities. The aft cargo containers can also host a variety of payloads.

Developing bases to support future space exploration requires the transport of large amounts of cargo to the Moon for research and human spaceflight development. Starship is designed to carry these building blocks.

See Also: Far Cry VR: The Game That Can’t Be Played at Home