Would have acted distinctively if that it had known plane was Russian: Turkey President Erdogan 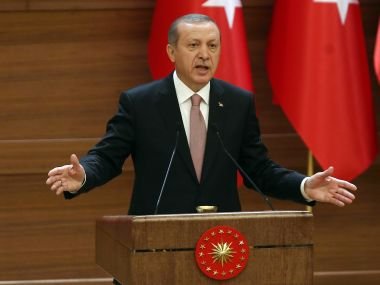 Istanbul: President Recep Tayyip Erdogan said on Thursday that Turkey would have acted contrastingly in the event that it had known a warplane its strengths brought down on the Syrian border was Russian.

“In the event that we had known whether it was a Russian plane perhaps we would have cautioned it in an unexpected way,” Erdogan told France 24 TV.

He additionally said that Russian President Vladimir Putin had not addressed his call after Tuesday’s episode that has genuinely harmed ties between two rival players in the Syrian conflict.

“I called Mr Putin yet up to this point he never answered my call,” he said.

Turkey’s military said the Su-24 aircraft was shot around two of its F-16s after it disregarded Turkish airspace 10 times inside of a five-minute period on Tuesday.

Russia however said no notice had been given and that the flying machine did not disregard Turkish airspace.

Putin has marked the go about as a “stab in the back” by “accessories of terrorists.”

“Of course they are lies, they are slander,” Erdogan told France 24.

“We have never, never had this sort of business association with any terror association. They need to demonstrate it, and in the event that they can, Tayyip Erdogan will leave office.”

Turkey likewise Thursday summoned the Russian ambassador to Ankara over a fierce showing outside its government office in Moscow over the plane bringing down.

A few hundred youthful activists on Wednesday flung stones and eggs at the mission and broke a few windows.

The remote service said it needed to express discontent over the “unacceptable” challenge and additionally a progression of occurrences against Turkish organizations in Russia.

“We are daunted that our agents in Russia and Turkish organizations are casualties of physical attacks did under the pretext of protests,,” the ministry said in an announcement.