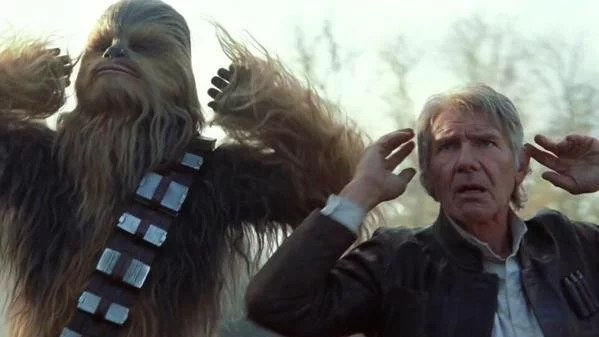 Time travel isn’t a major a portion of the Star Wars universe, and that is too terrible. Since we’d give pretty much anything for it to be December at this moment.

The new and last full-length trailer for Star Wars: The Force Awakens appeared amid the Monday Night Football halftime on ESPN, then was promptly discharged online to the euphoric happiness of Star Wars fans around the world. With Canada during the time spent choosing another government, the Toronto Blue Jays returning against the Kansas City Royals and Drake dropping another video, the Internet pretty much broke down into a heap of liquid slag under the anxiety. Also, if that wasn’t enough, advance tickets went on special for The Force Awakens in a matter of seconds before the trailer appeared, with Dec. 17 evening showings offering out in minutes.

We get our first take a gander at Rey (Daisy Ridley) carrying out her specialty on the desert planet of Jakku, descending through what has all the earmarks of being the huge inside of a slammed starship then striding over the sandswept hills with the moving droid BB-8 next to her. “Who are you?” Maz Kanata (Lupita Nyong’o) asks in voiceover. “I’m nobody,” answers Rey. Definitely, we have an inclination Rey will be, essential to be sure to the destiny of the cosmic system.

We see Finn (John Boyega), a Stormtrooper with the First Order – The Force Awakens’ development of the Galactic Empire – likewise on Jakku. “I was raised to do one thing,” Finn says in voiceover. “Yet, I have nothing to battle for.” Sounds like a gentleman looking for an honorable motivation. Furthermore, given the lightsabre duel he has with the detestable Kylo Ren (Adam Driver), we believe he’s discovered it.

The heart of murkiness

“Nothing will remain in our direction,” snarls the veiled Kylo Ren, intercut with a fix of Darth Vader’s bent, half-softened protective cap. “I will complete what you began.” From armies of First Order troops to a sky brimming with TIE contenders to the chrome-reinforced Captain Phasma (Gwendoline Christie), there’s a lot of dim side disagreeableness going ahead in the new trailer. What’s more, what’s Ren doing to X-wing military pilot Poe Dameron (Oscar Isaac) to make him shout in anguish?

The Millennium Falcon drives a couple of TIE contenders on a pursuit through a slammed Star Destroyer on Jakku. X-wings and TIE warriors conflict over a rich green world, and a rugged, blanketed scene (with BB-8 going about as Poe Dameron’s locally available droid, no less.) Something expansive collides with the surface of Jakku before Rey and Finn. While executive J. J. Abrams is by all accounts adhering near the soul of the first Star Wars movies, the embellishments have taken a serious jump forward. Also, the lens flare is being kept to a flat out least, express gratitude toward Yoda.

“There’s stories about what happened,” Rey says, plainly referencing the occasions of the first Star Wars set of three, set 30 years before The Force Awakens. “It’s actual,” answers a maturing Han Solo (Harrison Ford), conversing with Rey and Finn on board the Millennium Falcon. “Every last bit of it. The Dark Side. The Jedi. They’re genuine.” The connective tissue between the old movies and The Force Awakens appears to be solid in reality, and we even see a brief shot of a stricken Leia (Carrie Fisher) embracing Han. Be that as it may, where’s Luke? Other than the hooded, metal-gave make sense of coming to R2-D2, Luke is truant from the new footage, pretty much as he is from the film’s new blurb. The trailer brings up a larger number of issues than it answers, and that may be the best thing about it – Abrams, who understands the value of secrecy and surprises, has given us tastes of what’s to come without spoiling our appetites. All will be revealed soon. Just not soon enough.