Led by Xiaomi’s Lead Product Manager Jai Mani, the first smartphone under the Poco brand is set to take on handsets in the mid-range segment such as the OnePlus 6 and Asus ZenFone 5Z. The price of the smartphone in India starts at Rs. 20,999 and goes up to Rs. 29,999. The manufacturer had unveiled four variants of the handset in the market and they come with up to 8GB of RAM, Snapdragon 845 SoC, a 6.1-inch display, and more. Meanwhile, details of the Poco F1, including its price in India, launch offers, and more were already revealed by Xiaomi.

In terms of launch offers in the first sale today, buyers of the Xiaomi Poco F1 can avail a Rs. 1,000 instant discount by using HDFC Bank credit and debit cards. Additionally, Reliance Jio subscribers can avail up to 6TB of 4G data, alongside additional benefits of up to Rs. 8,000. Notably, the company will provide a soft-case bundled in the box, while an ultra-slim hard case priced at Rs. 399, and a Kevlar finished Armoured Case at Rs. 799 will be available separately. You can also purchase ‘official skins’ worth Rs. 299.

The Xiaomi Poco F1 is a dual-SIM smartphone that runs MIUI 9.6 out-of-the-box based on Android 8.1 Oreo. However, an MIUI 10 update is said to be coming soon. Xiaomi has also promised an Android P update. The Poco F1 uses MIUI for Poco, a customised version of MIUI that is said to be optimised for speed. The Poco launcher is said to appear closer to stock Android UI and it also includes features like third-party app icon support. Xiaomi will also provide support for custom ROMs and will release the kernel in the next few weeks.

The Poco F1 is equipped with a 6.18-inch display alongside 2.D curved Gorilla Glass 3 glass protection. It is powered by the Qualcomm Snapdragon 845 processor that comes with LiquidCool Technology. As mentioned, the smartphone comes in 6GB and 8GB RAM variants and bears a dual camera setup with a 12-megapixel Sony IMX363 primary sensor with 1.4-micron pixel, dual-pixel autofocus, and a 5-megapixel secondary depth sensor from Samsung. At the front, there is a 20-megapixel selfie camera that comes with HDR and AI Beautify features, with an IR light that powers the Face Unlock feature. The company claims that the AI camera is tuned especially for India, and has scene recognition features. The phone also comes with Dirac HD Sound support, with a Dual Smart PA. 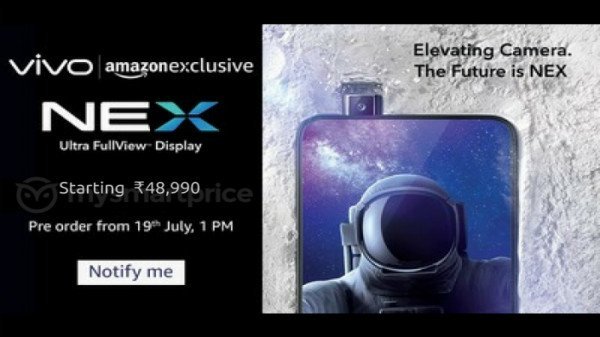 Surprising New Features in Vivo NEX That Will Glow Your Mind. Surprise Price in India

The hole likewise specifies that the Vivo NEX cell phone will be accessible only on Amazon and the pre-arrange for a similar will begin from the nineteenth of July and the organization will dispatch the cell phone around the same time.

This is a standout amongst other releases that we have seen on any cell phone, as the break includes the offers related with the Vivo NEX cell phone.

Surprising New Features in Vivo NEX That Will Glow Your Mind. Surprise Price in India

Vivo NEX particulars: The Vivo NEX has a 6.59-inch OLED show with a determination of 2316 x 1080px. In the engine, the gadget is running on the Qualcomm Snapdragon 845 Octa-center chipset with 8 GB of RAM and 128 GB of installed stockpiling.
Source: gizbot.com The Vivo Nex appears to have earned the title as the cell phone with the main genuinely bezel-less show and what seems, by all accounts, to be another cell phone world first – a lifting front camera.

The Chinese cell phone maker divulged a somewhat virtuoso idea telephone, Vivo Apex, back in February at Mobile World Congress, making trust in the ‘all-screen’ dream. Anyway a generation adaptation wasn’t required to arrive before the actual arranged time as June 12, when Vivo propelled its most recent leader with a 91.24% screen-to-body proportion, beating every other telephone available.

What’s more, it’s huge as well: the Nex is 6.59in with a Super AMOLED show, so it’s useful that the battery is likewise huge, 4000mAh, and accompanies quick battery charging (22W).

It’s to a great extent our selfie propensity that forbids a completely indent less or bezel-less screen, so Vivo outlined its way around the issue with a 8-megapixel camera that drops down into the telephone and flies up when required. Concerning the essential camera on the back, a double arrangement of 12-megapixel and 5-megapixel is utilized, which could be viewed as a frustration as comparable leads are utilizing more grounded setups, for example, the OnePlus 6 that accompanies 16-megapixel and 20-megapixel.

With respect to opening the telephone, the Vivo Nex utilizes an in-show sensor, as observed on the Apex idea telephone. This time it doesn’t cover very as a great part of the show yet is asserted to be “enhanced in both exactness and speed, following its victories with the X20UD and X21”.

AI-fueled, the leader accompanies a brilliant camera, alongside Jovi collaborator and a committed AI catch.

The Nex highlights the Qualcomm Snapdragon 845 processor, with 8GB of RAM and either 128GB or 256GB of inner stockpiling.

It ought to be noticed that the Vivo Nex comes in two releases, both accessible in dark and red, one being the Nex S, a superior form, as portrayed above and the marginally more moderate Nex A with 6GB of RAM, without the alternative of 256GB of inward stockpiling and the unique mark sensor on the back instead of in-show.