Far Cry VR: The Game That Can’t Be Played at Home Far Cry VR is not a normal virtual reality game. Designed for “free-roam VR”, it can’t be played in your home on an Oculus Quest or Valve Index headset. Instead, you must go to a special location where VR magic transforms a room the size of a whole apartment into Far Cry 3’s  pirate-controlled island, exotic. This allows up to eight people the freedom to walk around and explore huge areas that simply can’t be done within the confines of your furniture-filled living room.

Some players previously mentioned Time Crisis vibe comes directly from Far Cry VR’s set-up. It’s essentially a high-concept arcade game; a 30-minute experience only available at 52 venues across the world. These parameters mean the depth of experimentation that you’d expect from Far Cry is traded for instant and accessible thrills.

There’s no choice between stealth or action, there are no outposts to capture, and there are no animals to befriend and unleash on your foes. Instead, you and a group of friends are tasked with simply gunning down waves of enemies to obtain the highest score on the leaderboard. These concessions to the Far Cry formula are understandable given the format, but sadly the experience doesn’t take full advantage of its one unique feature. While you are able to freely walk around the game’s environments, the level design is restrictive. Areas funnel you down narrow pathways, which makes for a very on-rails shooter feel. Fights take place in static kill boxes which seem designed for you to simply stand in position and fire on incoming enemies, rather than navigating the space to hunt them down. But despite all this, Far Cry VR is a good time, at least in the moment. Being able to walk long distances uninterrupted in a VR game feels weird and fun, and holds novelty for most of the 30 minutes. Despite not demanding rigorous movement, the immersion makes it all too easy to get into character, and so after half-an-hour of ducking behind cover and swinging an AK-47 wildly, you build up quite a sweat. And while most of Far Cry’s hallmark ideas are ignored, the game’s stand-out segment does make good use of the series’s obsession with drug-fueled psychedelics. Enemies fire at you from architecture floating in the sky, while sea creatures float by uncomfortably close amidst the carnage. It’s all amusingly trippy. 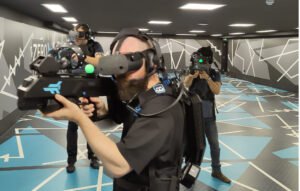 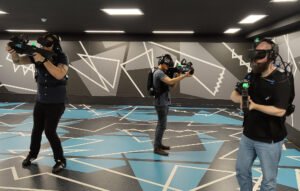 Zero Latency, the company behind Far Cry VR, has just three locations in the UK and 11 in the United States. This means you’ll likely have to travel to visit one, perhaps even quite a distance. If you’re a Far Cry fan, such a pilgrimage will probably disappoint; this is a Far Cry game in name only. But if you live near a Zero Latency site and have the cash to spare, there’s definitely some fun to be had in free-roam VR. I suspect one of the company’s bespoke games that don’t come shackled to the expectations of an existing series, however, is probably the best way to experience it.