The $93-Billion Plan to Put Astronauts Back on the Moon On the morning of 17 March, the world’s largest set of doors rolled open to reveal an aerospace marvel (which will take humanity back on the moon) at the Kennedy Space Center in Merritt Island, Florida. There, in NASA’s biggest building, stood its newest rocket — the most powerful ever built and nearly 100 metres tall. That evening, an enormous wheeled platform rolled slowly out of the building, carrying the mega-rocket through the coastal night towards its launch pad. 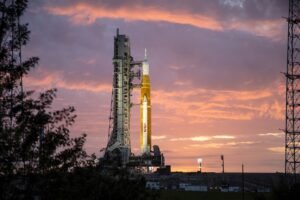 Like many space enthusiasts around the world, Renee Weber, a planetary scientist at NASA’s Marshall Space Flight Center in Huntsville, Alabama, stared in awe at the webcast feed. “That thing is going to the Moon,” she thought. 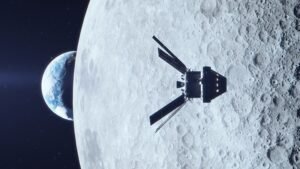 And unlike any rocket in the past half-century, that thing is going to carry people to the Moon. NASA plans to use it to send crews back to the lunar surface, more than 50 years after US astronauts last walked there during the Apollo programme. The upcoming push is called Artemis, after Apollo’s twin sister in Greek mythology. 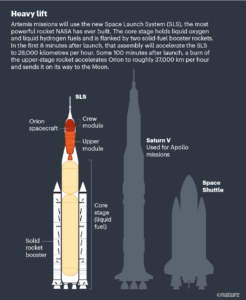 NASA aims to kick off the Artemis era later this year, with the first launch of its mega-rocket, called the Space Launch System (SLS). That mission, dubbed Artemis 1, will fly without any crew around the Moon and back on a trip lasting between 26 and 42 days. NASA hopes to achieve its next giant goal, of landing astronauts at the lunar south pole, by the end of 2025. To support the Artemis programme, NASA has contracted companies to send a series of robotic landers to the Moon, which will carry NASA-funded instruments to explore its surface and enhance the science that could come from astronaut missions. 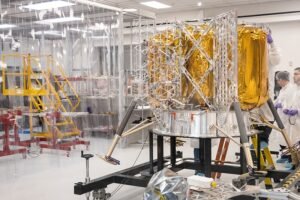 The Artemis programme faces huge challenges, notably whether the US Congress will be willing to pay the cost of several billion dollars per flight. But if it proceeds anything like NASA has envisioned, it will give a major boost to science education and public awareness, much as the Apollo programme, born from the cold-war-era space race between the United States and the Soviet Union, inspired a generation of scientists and engineers. 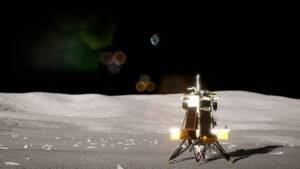 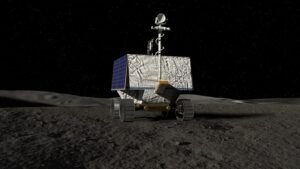 Gearing up to go back on the moon

Artemis got its official start in 2017, when former president Donald Trump signed a space-policy directive telling NASA to focus on sending astronauts to the Moon. The roots of the idea trace back further, to at least 2004, when then-president George W. Bush prioritized sending astronauts to the Moon, and on to Mars. In response, NASA began designing heavy-lift rockets — precursors to the SLS — that could take people and cargo beyond low Earth orbit (see ‘Heavy lift’). Where the Sun doesn’t shine

Several potential landing sites are near the 21-kilometre-wide Shackleton crater, which lies at the south pole and is named after the Antarctic explorer Ernest Shackleton. In a 6.5-day mission to Shackleton, astronauts could not only search for volatiles but also collect rocks left over from the magma ocean that once covered the Moon7. The impact that created Shackleton exposed chunks of this previously buried ancient lunar crust.