EXISTENCE OF OTHER LIFE IN SPACE-THE FIRST FLOWER GROWN 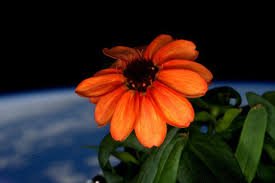 A blossom has sprouted in the zero gravity of space interestingly.

US space astronaut Scott Kelly reported the memorable news that a zinnia plant had blossomed on the International Space Station (ISS) on his Twitter account, alongside a photo of an orange, 13-petalled bloom.

“To start with ever blossom developed in space makes its introduction! #SpaceFlower #zinnia #YearInSpace,” he composed, including: “Yes, there are other life frames in space!”

A NASA blog about the blossoms, composed before one had sprouted, said zinnias were picked not for their magnificence but rather to “offer researchers some assistance with understanding how plants bloom and develop in microgravity”.

Toward the end of December, Mr Kelly tweeted a photo of tragic looking zinnias with twisted, mildew covered takes off.

“Our plants aren’t looking too great. Would be an issue [for a human colony] on Mars,” he said.