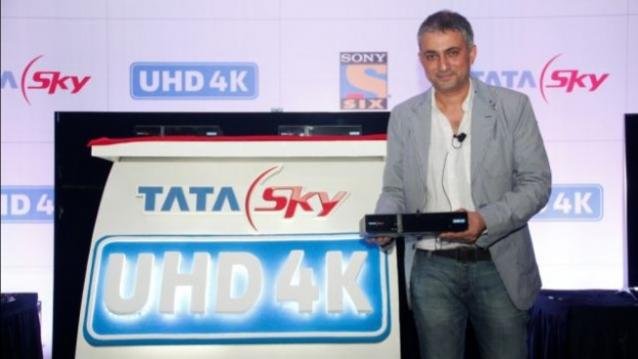 Tata Sky was the first Direct-To-Home (DTH) service provider which showcased the first 4K broadcast in India, during the Germany vs France Quarter-final tie at the FIFA Football World Cup 2014. On Saturday, Tata Sky announced the retail launch of this 4K UHD set-top box (STB) at Rs 6,400 for new subscribers and Rs 5,900 for existing subscribers.

Subscribers can buy a brand new 4K set-top box or use Tata Sky’s multi-TV connection option. Apart from 4K content, the STB can showcase SD as well as HD streams. You can pre-book the 4K STBs using the Tata Sky 24×7 helpline, Tata Sky website and through dealers.

Tata Sky 4K offers Ultra High Definition picture quality and Dolby Digital Plus 7.1 surround sound. 4K at 8.3 Megapixels (3840×2160) has approximately four times the pixels as that of 2K (1920×1080) the current HD standard. With the ICC Cricket World cup beginning next month, the time is ripe for Tata Sky to capitalise on the 4K frenzy. In fact Tata Sky had showcased its first live 4K broadcast last year, during the football world cup.

We did a first hand preview of the live 4K broadcast, and came away impressed with the picture quality and overall 4K experience. Here is a gist of the experience: ‘This being the first ever 4K broadcast in India, naturally it had piqued our fancy. Tata Sky also had an HD broadcast as well as a standard definition (SD) broadcast on two different TVs on display as well. These TVs were surrounding the Sony 4K UHD TV. This immediately gave you an idea of the details being shown by the 4K broadcast vis-a-vis the full HD and SD broadcasts. Needless to say, the details were impressive. Naturally, since 4K (3840×2160) has four times the pixels as the regular full HD stream, that is expected. We were observing the 4K broadcast from a distance of around 20 feet and couldn’t really notice any kind of pixillation on the 4K broadcast. Having said that, we would have liked to see at least the HD and 4K broadcasts on similarly sized TV sets, as that would have given us a true idea of the quality difference.‘

Now it is just up to the TV channels to start offering 4K streams. We wonder what the pricing will be like for such channels. Tata Sky hasn’t mentioned any 4K-ready channels which it plans to start off with.