How Was The Avatar 2 Shot The shooting of The Avatar 2 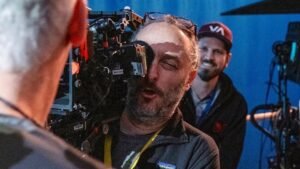 For Avatar sequels, multiple Sony VENICE cameras have been paired in various 3D stereoscopic rigs. Using the Sony cabling system, the only part of the VENICE carried on the rig was the image sensor optical blocks (Rialto), significantly reducing onboard camera weight to about three pounds per sensor block (as stated by Sony). By lowering the weight and improving ergonomics, Cameron earned the ability to shoot with greater flexibility and freedom. Moreover, with the recent Avatar 2 trailer release, we dug a bit into set pictures that were captured years ago while filming Avatar 2, to find out more about the camera and rig used. 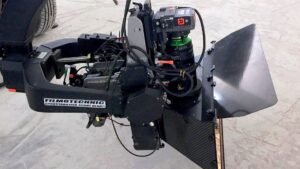 3D rigs are known as mirror rigs or beam splitter rigs. The whole idea with 3D is to capture left and right-eye images and then superimpose them on the screen so that we get the perceived impression of depth within the picture. The way it can be achieved is by using two cameras one for the left eye and one for the right eye. Furthermore, it’s quite important to get the distance between those cameras correct for each scene and this is where a beam splitter comes in really handy.

The image from the top camera is reflected off the mirror which is a 45 degrees image from the horizontal camera that shoots through the mirror. By adjusting these cameras from side to side we can actually make the distance between them correct for the particular 3D depth of the scene. This is the methodology utilized by Cameron in shooting Avatar’s sequels.

For instance, below you can find the sensor unit of the ARRI ALEXA M attached to a beam splitter 3D rig. However, in the case of Avatar 2 and beyond, the Sony VENICE’s Rialto (extension unit) was used. 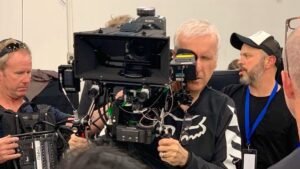 The Avatar production has built a special beam splitter ‘compact’ 3D rig for handheld shooting style. The rig weighs about 37lb (17Kg) and includes 12 axis servo package. As we can see in the picture, the rig was used by Cameron himself to shoot some scenes. As for the underwater sequences, it remains a bit mysterious how a beam splitter can be used underwater.  However, we can assume that the solution is very similar to the RED Dragon 6K 3D Underwater Camera System invented by cinematographer Pawel Achtel. You can imagine the high level of complexity of this implementation. 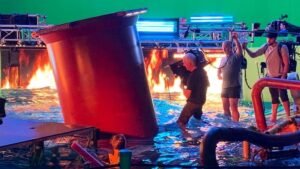 Avatar 2 is aimed for IMAX 3D and not less than that. Indeed, 3D screening is not popular anymore and is a lot less desirable for moviegoers. Al those 3D solutions demonstrated in this article were invented a couple of years ago when the hype for 3D imagery was high. However, this hype is being smashed as audiences do not want to watch movies with glasses since it reduced luminosity. Nevertheless, Avatar 2 was shot on the best 3D methodology and was developed around it. Hence, a marvelous 3D experience is guaranteed.